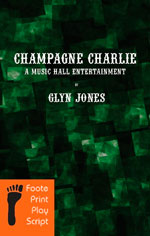 A one man show based on the life and songs of George Leybourne, the great Lion Comique of the Victorian music hall and affectionately known from his famous song as 'Champagne Charlie.' During his relatively short career he introduced and sang over 200 songs including that other famous number 'The Man on the Flying Trapeze'. He died at the age of 44.

Set: The Salon of a Victorian Home