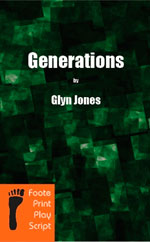 Laura is getting a divorce. She has returned to her mother's dilapidated house leaving her children in the care of a neighbour, Lindy, fearing that their father will come looking for them.

Bogged down by poverty Bessie is trying to cope with life and an elderly mother and the added extra strain of Laura brings deep-seated family tensions to a head.

Sharon, Bessie's other daughter arrives to celebrate thanksgiving with the rest of the family. As they try to deal with the death of Grandmother, secrets of the past and hatreds rise to the surface and need to be confronted before they can cope as a unified family with the redneck violence and bigotry of their men folk.

Set: The Kitchen / living room of a dilapidated house on Route 33